Harvest Time and a Visit from Mr Mojo !

Happy Monday Peeps !  Today the weather here in my part of Cornwall is absolutely glorious - clear blue skies, warm sunshine and a gentle breeze to bring a touch of freshness to the air ahhhhh......

Over the weekend hubs and I harvested most of our apple crop, considering we have only a small urban garden, our fruit trees have done really well this year.  Here's a pic of the first harvest of apples (the pears don't look so good this year, lots of them but the skins are blemished and the fruit is smaller than normal). 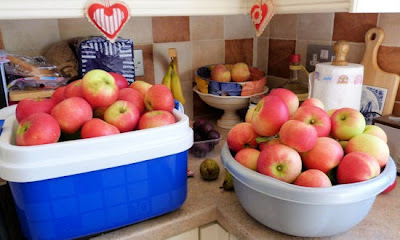 We're going to try and keep some of the fruit, wrapped and stored in cardboard, rather than cook most of them, as I've done in previous years.  They are eating apples (Pink Lady and Golden Delicious) but they cook down nicely and I don't need to add any extra sugar.  After cooking I freeze them in pudding sized amounts so they're ready to defrost and use in a yummy crumble or Eve's Pudding... slurp !  Of course they are delish just eaten fresh from the tree too.
As you can see from this next pic, there are still a number of apples left on the tree which we'll be picking probably today or tomorrow. 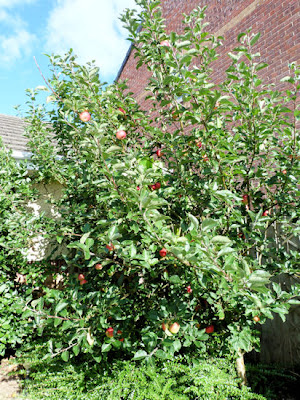 ﻿
I thought you might like a sneaky peek at my latest two quilting projects too - can't share full pix yet as I haven't given them to the people they have been made for and don't want to spoil the surprise as neither of them know there's a quilt coming their way.  Two very different projects and both were a joy to create.  I can't wait to give them away now they're finished ! 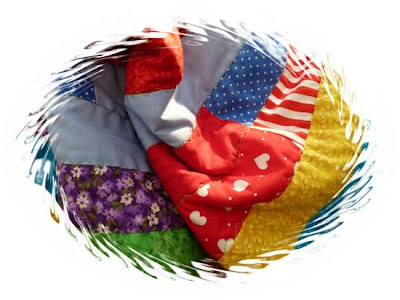 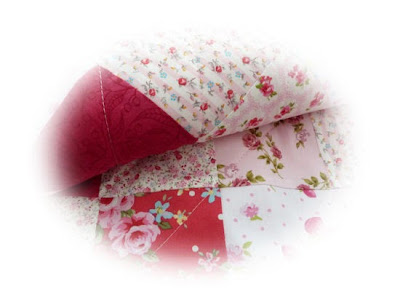 My regular visitors will know that Mr Mojo hasn't been around these here parts much lately, however, he did pay a flying visit over the weekend.  I managed to finish two whole cards - how about that ?   I'll share the other one with you tomorrow, but for now here's the one I've called 'Mirror Image' 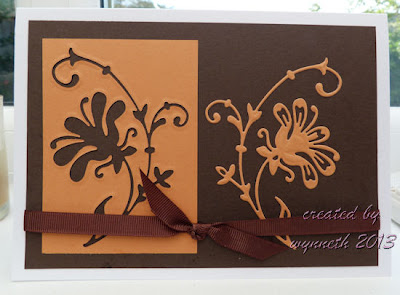 I was playing around with a new-ish die from Marianne's Designs which I have in my stash and hadn't used yet.  I decided to cut it out from some Peach Parfait SU! cardstock and once I'd cut it out I loved the negative image too so put this over a scrap of Early Espresso SU! cardstock, then placed the diecut on the opposite side to give a mirror image.  Finishing it off with a length of dark brown grosgrain ribbon I found in my stash, tied in a simple knot.
What do you think ?  Did it work ?  I left off any kind of sentiment as I think this would work for many occasions and I can add a sentiment inside as necessary.  Not too flowery for a guy's card either I don't think.
Well, that's it from me for today, my crafting pal Jacqueline is coming round to play this afternoon and I have just-baked cookies cooling in the kitchen for us to munch on over a cuppa.  Not sure exactly which of my current favourite crafts I'll be indulging in this afternoon, will it be more cards ?  a little knitting ? quilting (I have another cushion partly finished ? or some hand sewing.... hmmmm... now let me see.....
Bye for now, do call back tomorrow to check out the other card I made over the weekend.﻿

Mr Mojo is "in da house"!!!! lovely card and quilty projects and oh my .... what a lot of apples? Mr K's idea of hell but I do like a nice pink lady

Did somebody say pudding!? Slurp! Those apples look absolutely sensational. Mr H will be deeply jealous as we only had about 5 apples on our trees. The rest ended up on the floor.... =0(

Your quilts look absolutely fabby as usual. The lucky recipients will be chuffed to little bits.

Your positive negative card is an absolute triumph. What a great way to make sure you use every little bit of the die cut. Love your choice of colours too. IT ROCKS :oD

Wow, what a crop. They look delicious and the things you turn them into sound yum too. I actually went to an apple orchard this week and bought a large bag with the intention to turn them into my "first" apple pie. I've had the recipe 10 years now and haven't tried it yet! Too long I know.
Your quilts look delightful, I was already thinking -3 posts and no sewing (apart from on the card)? Now I see you are busy behind the scenes. Can't wait to see the reveal.
Your card is great, it's very stylish and you made the right decision to leave off a sentiment. I'd have done that too. Now, whom to use it for?
Great post.
Hugs,
Katie x

Welcome, come right on in and make yourself at home .....

Hi my name is Wynneth, I live and craft in Cornwall, UK.

Thanks so much for dropping by to my little crafty space, grab a coffee, pull up a chair and enjoy a bit of peace and quiet!

Feel free to join me as a Follower, that would be awesome, I hope you'll find the time to drop by now and again.

Please leave me a comment on my work if you can, it's really great to get feedback, or just say Hi! to let me know you've visited. 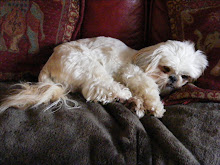 All projects published on my blog are copyright to me - I am happy to share my designs here in the hope that they may inspire you to develop your own ideas. However please respect my right not to have my designs copied or "lifted" or entered for publication, competitions, etc. Direct copying of any design shown on this blog is an infringement of copyright.

I'm a member of the Cute Card Thursday Design Team

I made it into the Less is More showCASE !!

Craft Mad and Loving It blog